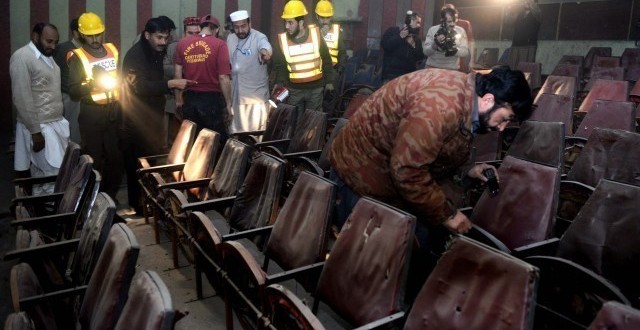 The boy identified as Hassan was produced before the ATC amid tight security. The investigation officer from Faqirabad police station told the court that on February 11, several people were inside the cinema’s premises when the attackers threw two hand grenades which killed 14 people and injured 21 others.

A few days before the attack on Shama, a similar attack was carried out on Picture House Cinema.

“After these incidents, the police constituted a committee to probe the incidents and go after the people behind the attacks,” said the investigation officer.

“As a result the police arrested Hassan, a resident of Tirah, from Lady Reading Hospital in an injured condition while his accomplice is still in hiding.”

He requested the court to give them custody of the alleged attacker for ten days so they could complete their investigation.

While the court turned down the police’s request for 10-day custody, they agreed to let them keep him for three days.

In another case, Peshawar High Court division bench of Justice Qaiser Rashid Khan and Justice Ikramullah Khan directed the government to compensate owners whose land will be used for construction of phase-III of the Northern Bypass.

The bench was informed by Advocate Shah Nawaz Khan, counsel for the petitioner, Fida Muhammad, the National Highways Authority (NHA) got 332 kanals of land in Badezia and Regi villages which is worth Rs670.9 million.

He added that so far the government has paid 30% of the money owed while the rest is yet to be paid.

The division bench had already ordered the NHA to pay the complete amount to the owners but the payment is still incomplete.

The division bench directed the relevant department to compensate the owners of the land according to the law and previous order of the court.

Previous: Like it or not: CS Arbab continues to run K-P’s affairs
Next: New cases surface from Peshawar, NWA