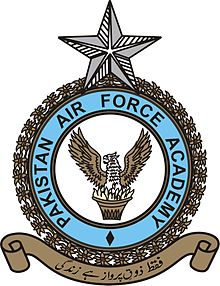 The Pakistan Air Force Academy (PAFA) is an accredited co-educational four-year military academy which provides undergraduate education to officer candidates for the Pakistan Air Force (PAF). Located in the town of Risalpur in Nowshera District of the Khyber Pakhtunkhwa province in northwestern Pakistan, it is a premier cadet training institution of the Pakistan Air Force which offers academic professional degrees. Its role is the training of General Duty Pilots (GDP), Aeronautical and Avionics Engineers and the initial training of other Ground Branch cadets. Cadets of all branches join the Academy following a recommendation by the Inter Services Selection Board (ISSB) of Pakistan and the Air Headquarters Special Selection Board for Short Service Commission candidates. Graduates of the Academy’s four-year program receive a Bachelor of Science degree, and most are commissioned as flying officers (lieutenants) in the Pakistan Air Force.

The Academy was created in 1910 and was a former aerodrome/airfield of the Royal Flying Corps then later Royal Air Force. It officially became the airbase of the PAF on 15 August 1947. On 21 January 1967, it was again upgraded to the status of an academy by then-President Ayub Khan. Currently, it consists of 5 different components.

At the heart of the PAF since its inception, the Pakistan Air Force Academy has bred generations of officers for the PAF and other branches of the Pakistani Armed Forces. The Academy now has impressive premises with state-of-the-art infrastructure portraying the progress from the modest beginning initiated by a handful of dedicated men in 1947