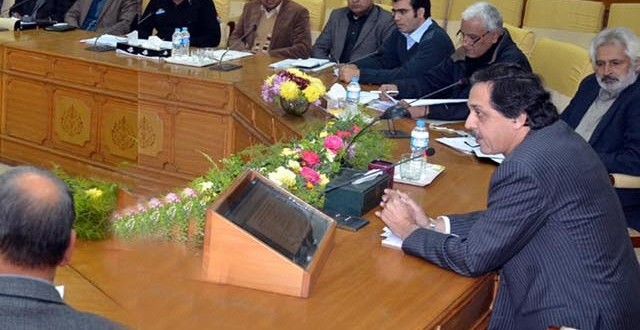 Like it or not: CS Arbab continues to run K-P’s affairs

A senior official of the CM Secretariat said the CM expressed his desire to replace the chief secretary in a meeting with Prime Minister Nawaz Sharif last week.

The official said Federal Secretary Ministry of Privatisation Amjad Ali Khan was being considered by the K-P government as Arbab’s replacement.

When contacted, the CM’s spokesperson Sheraz Paracha said the matter is merely a routine shuffle within government departments. “We have requested the federal government for a change at the top and asked that the responsibility be temporarily taken over by Additional Chief Secretary Khalid Pervaiz,” he said.

Paracha shared three names were being shortlisted after the CM’s request, however, the government wants Amjad as the next chief secretary. “The federal government will decide on the appointment in the ongoing week.”

He said owing to the “cordial” relationship between the province and the centre, K-P’s wishes will be respected by the federal government to ensure the smooth functioning of affairs at the higher level.

Meanwhile, people familiar with the matter within the Civil Secretariat revealed Arbab attended official meetings on behalf of the provincial government in Islamabad on Tuesday.

After months of reported wrangling between Khattak and the chief secretary, who is a close friend of Pakistan Tehreek-e-Insaf (PTI) General Secretary Jehangir Tareen and was said to be backed initially by PTI Chairman Imran Khan, the proverbial noose seems to be tightening around the bureaucrat’s neck.

Arbab had taken charge of the province in the summer of last year, despite reported objections by Khattak who wanted someone else for the post. The relationship of the two heads of the province was said to be rocky from the start, with difficulties and difference of opinions over running K-P’s affairs.

PTI insiders said Imran and Khattak had indulged in a ‘cold war’ over Khattak’s opposition, and, later, his call for the removal of Arbab.

A senior official within the government said, “After clear directions from the CM, Arbab should not attend meetings of the provincial government.”

He explained after the 18 Amendment, provinces are empowered to have a functioning team for better relationships among various departments and smooth functioning of the government. “Yes, he (Arbab) has an understanding and has working relations with senior PTI leaders but he is exploiting his links by bypassing the CM, and reporting to and taking orders from the senior leadership of the party,” he added.

However, another senior official familiar with the matter told The Express Tribune there were at least three rounds of meetings which had taken place between the bureaucracy and the PTI but tensions could not be resolved. He claimed the bureaucracy was already at loggerheads with the K-P government, and the manner of action taken against such a senior bureaucrat had raised scepticism within the bureaucracy.

Another highly placed official told The Express Tribune that Arbab had asked the federal government to “pull him out of his current job position” but so far the notification has not been issued.

2014-02-13
admin
Share !
Previous: Gunned down: Nine men of a family killed in cold blood
Next: Like it or not: CS Arbab continues to run K-P’s affairs