NEWS
You are here: Home >>> News >>> Gunned down: Nine men of a family killed in cold blood 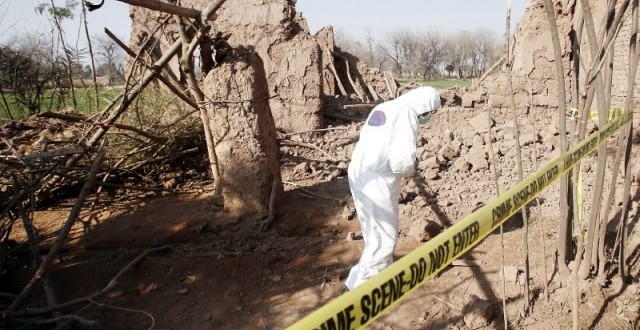 Gunned down: Nine men of a family killed in cold blood

Heavily armed militants entered the house of deceased Zafar Khan in Masho Khel village around 10pm. They took all the boys and men hostage for over two hours, but shot them dead outside the house, near the graves of their family members.

Earlier, on February 1, Zafar Khan, his two brothers and nephew were killed during an exchange of fire with a militant, Rahimdad, who was later gunned down by police commandos in an encounter. And it was Rahimdad’s murder the militants wanted to avenge.

A police official told The Express Tribune that the armed men shot dead the six men and three teenagers after midnight, but they found their bodies in the morning. “Only younger children and women were spared,” he said, adding that a letter was also handed to the women in which the militants threatened to kill 20 men of the family to avenge “their man” Rahimdad’s death, who belonged to Sulaiman Khel village.

The militants also detonated two bombs inside the hujra, causing panic among the locals and destroying a portion of the building.

Talking to The Express Tribune, Israr Ali, the head of Aman Lashkar’s Masho Khel chapter, said among the nine killed, three were between 14 and 16 years old. However, the lives of two boys, of ages six and eight, were spared. “Two bombs of around three kilograms each were used to destroy a portion of a house,” he added.

Soon after the militants had broken into the house, the women managed to call the police for help and other members of their family as well to bring over money and gold, so that the armed men would let them go. However, no one was sent for their rescue, which is why the militants kept the family hostage, with utmost ease, for about two hours.

They easily escaped as well.

On Wednesday afternoon, workers of the Aman Lashkar and infuriated villagers blocked the highway for more than an hour in protest. They shouted slogans against the local police and government for not compensating them for the loss of their family members.

Panic and fear gripped the entire village of Masho Khel after the two bomb blasts, causing people to guard their houses in fear of similar attacks. “It was a sleepless and chilly night that we had to spend on our roofs to keep vigilant,” said a local elder on the condition of anonymity.

2014-02-13
admin
Share !
Previous: Sleepless in the suburbs: Families decide to move to safer ground
Next: Like it or not: CS Arbab continues to run K-P’s affairs