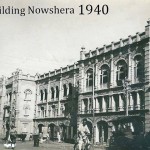 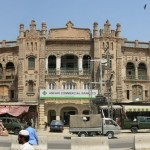 The Taj Building is an architectural jewel on the main Grand Trunk Road in Nowshera, Khyber Pakhtunkhwa, Pakistan.

Built in the 1920s, the imposing structure has endured the ravages of time despite lack of any concerted attempts in the past to preserve it. The facade of the three-storey building is highly decorated with floral and vine patterns in intricate stucco. The sweeping round arches and numerous embellished columns represent a charming architectural blend of Roman, Gothic and Oriental. An arched gateway on the side of the building with beautiful jharoka-styled (elevated window balcony) features leads into the main compound. [1] The building was constructed by Khan Bahadur Taj Muhammad Khan OBE MLC of Badrashi Village, Nowshera. He was a famous colonial-era contractor and landlord whose father KB Abdul Hamid Khan had been in the service of the British Empire as well. He was a wealthy man and was particularly fond of racehorses. He used to travel extensively in India and had built several grand mansions for his own comfort. The present National Defence College building in New Delhi, India was also his personal mansion.