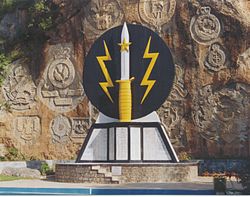 The Special Services Group (SSG) is a special operations force of the Pakistan Army, similar to the U.S. Army’s Special Forces and the British Army’s SAS.

The SSG, headquartered in Cherat, is headed by a Major-General and divided into ten battalions, the actual strength of which are classified.

SSG Pak was raised by amalgamating 17/10th Baloch (19 Baloch) and 312 Garrison Company. Based out of Cherat and Attock, the SSG was created in 1956. That year, 19 Baloch was selected for conversion to a special operation force. As a result of this, the SSG has inherited many of the traditions and insignia of the Baloch Regiment. The 19th Baloch Regiment’s first commanding officer was Lieutenant Colonel (later Major General) Aboobaker Osman Mitha who commanded it for six years till 1961. The first commander of its Alpha Company was Major (later Lieutenant Colonel) Gaideen Khan Abdullai Mahsud. Their initial training and orientation as regards tactics was based on the US Special Forces pattern with whom they co-operated closely in the Cold War years. The SSG initially had 6 companies and each company had specialization units, specialized in desert, mountain, ranger, and underwater warfare. The desert companies participated in training exercises with US Army Special Forces Mobile Training Team in late 1964. In August 1965, scope of SSG was raised from a battalion size force to larger Special Operations outfit and instead of 19 Baloch (SSG) they simply adopted the name Special Service Group. The scuba company in Karachi was renowned for its tough physical training. Later on, Chinese training, tactics, weapons, and equipment were also introduced.