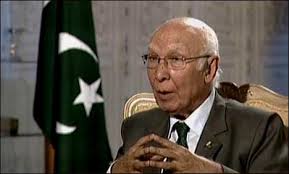 Sartaj Aziz ( 7 February 1929), is a Pakistani statesman, veteran Pakistan Movement activist, and the professor of economics at the Beaconhouse National University. He served as the 21st Treasure Minister during both first and second terms of Prime Minister Nawaz Sharif. His last government assignment was at the Foreign ministry as its minister until the removal of Sharif’s government on 12 October 1999. According to Pakistan Muslim League (N) sources, veteran politician Sartaj Aziz has emerged as a strong presidential candidate to be elected in September 2013.

Aziz is noted for driving the Pakistan’s national economy on free-market economics principle and initiated the economic liberalization and privatization programmes. In addition, he served as an adviser to the Foreign ministry while he helped implementing the economic policy through Economic Coordination Committee (ECC). He is renowned for his peace activism and was the only senior minister opposing the decision of conducting nuclear tests in response to India, but later retraced his position in 2002. As of current, Aziz is serving as the vice-chancellor of the Beaconhouse National University (BNU) as well as the professor of economics and management sciences.