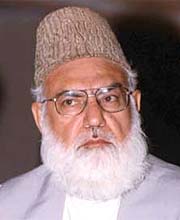 Qazi Hussain Ahmad (January 1938 – 6 January 2013) was a prominent religious scholar, Islamic theologian, Islamic democracy advocate, and former Emir of Jamaat-e-Islami, the rightist and right-wing populist political party in Pakistan. He was a strong critic of the counter-terrorism policy of the United States, and was widely known for his opposition against United States’ participation in civil war in the neighboring Afghanistan.

Qazi was born in 1938 in the house of Maulana Qazi Muhammad Abdul Rab at Ziarat Kaka Sahib, Nowshera District, Khyber-Pakhtunkhwa, Pakistan. Qazi Sahib is descendant of great Seljoki Sheikh Hazrat Sheikh Akhund Adyan seljuki Baba/Akhuna din Baba ( شیخ اخوند ادین بابا /اخوندین بابا/سلجوقی),who was a teacher of Hazrat kaka sahib and contemporary of Khushal Khan Khattak,the shrine of sheikh Akhund Adyan is at Akora khattak,the descendants of sheikh Akhund Adyan seljoki are titled as Qazi or Qazyan and mostly are living at ziarat kaka sahib. A teacher by profession, Maulana knew religious knowledge and political influence to the extent that he was appointed as the President of Jamiat-e-Ulema-e-Hind for Khyber-Pakhtunkhwa. Qazi Hussain Ahmed was the youngest among his ten siblings.

After having completed early education at home, Qazi Hussain Ahmad was admitted to Islamia College, Peshawar and got his Master of Science (M.Sc.) degree in Geography from Peshawar University. He served as lecturer at siedu college Swat for three years, teaching at the graduate level. He left university after three years. After that he started his own business. He marked his presence in this field and was elected as Vice President, Khyber-Pakhtunkhwa (Provincial) Chamber of Commerce and Industry.

Qazi Hussain Ahmad died on January 6, 2013, at 01:40am Pakistan Standard Time in a local hospital in Islamabad, Pakistan. The cause of his death was reported to be a heart attack.