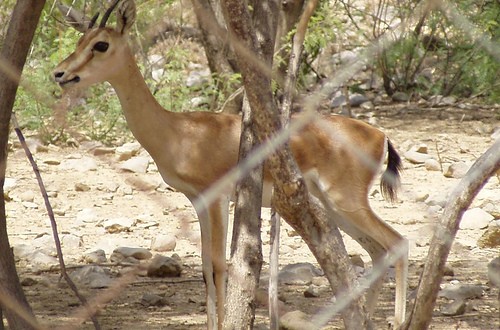 Established on the hilltops and plains of Khwara Range near the Indus River in Nizampur area of Nowshera district, the Manglot Wildlife Park is providing a sanctuary to endangered wildlife species and serving as a scenic recreational resort for the tourists.

The park was set up in 1990s to serve as a sanctuary for the wild species besides creating awareness among people about importance of bio-diversity and to provide recreational facilities to the visitors. After passage of almost 20 years, the park is presenting a success story of the efforts being made for preservation of natural environment for protection of endangered wild species.

A visit to the Manglot Wildlife Park disclosed that the sanctuary, spread over an area of 1,756 acres, is covered with thick forest green and dry land can also be felt through taking a satellite view of the park through Google’s navigation site. The aerial view clearly differentiates fenced area of the Manglot Wildlife Park, showing it as dark green while the nearby area is of soil color.

The park was established with an aim of making a sanctuary for conservation of wildlife through protection of its habitat   said District Forest Officer NWFP Wildlife Department while talking to a group of journalists who visited the recreational area. Now, he added, it was not only conserving the wildlife in the province but was also instrumental in re-introduction of endangered species in other areas by shifting the additional animals to parks and sanctuaries of the NWFP.

The flora and fauna in the park include scrub forest mainly consisting of olive trees. Vegetation of the forest predominantly are acacia modesta, zizyphus nummelaria, olea cuspidate, deodonia viscose and monothica boxifolia.

While animals include Chinkara, hog deer, common leopard, wolf, wild boar, jackal, porcupine and hare. Reptiles including different kind of snakes and wild lizards are also found in the park. The birds in the park included Chukar, three varieties of partridges, rock pigeon, dove and several sparrows from different species.
He said that in some cases common leopard was also spotted in the park, which reflects its ecological health. He said the animal visited the areas where it found food and protection. The Wildlife Department, he said, captured two leopards in the park through special traps and shifted them to Kund Park for visitors. Top predators are not allowed in the park because it is fenced and thus provide limited area to animals to escape for safety.

Within the park, the Wildlife Department has also constructed an mud track of 15 kilometres for providing an opportunity to the visitors to have a look of different scenic views of the park besides viewing in some places cluster of different animals while drinking water from pots. Elevation of the track ranges from 700 feet to 3,000 feet.

The park is also playing role of the economic lifeline and health of population of the region by providing job opportunities to the local people besides providing them clean environment. The officer said the locals benefited from limited vegetation for their livestock, in prevailing circumstances when country is facing rain shortage besides obtaining fuel wood. A number of bee honey traders also benefit from the greenery and flowers of the park. The forest in the park is also maintaining water level high in the region benefiting the dwellers in obtaining water through wells besides cultivation of different crops.