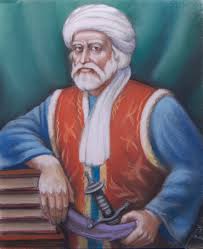 Khushāl Khān Khattak, also called Khushāl Bābā  was a Pashtun poet, warrior and scholar, and chief of the Khattak tribe of the Pashtuns. Khushal preached the union of all Pashtuns, and encouraged revolt against the Mughal Empire promoting Pashtun nationalism through poetry. Khushal is the first Afghan mentor who presents his theories for the unity of the Afghan tribes against foreign forces and the creation of a nation-state. Khushal wrote many works in Pashto but also a few in Persian. Khushal is considered the “father of Pashto literature” and the national poet of Afghanistan.

Khushal’s life was spent in struggling against the Mughal Empire who had fluctuating relations with the Afghans in what is now Afghanistan, the Khyber Pakhtunkhwa and the Federally Administered Tribal Areas of Pakistan. In order to restore Afghan freedom, Khushal challenged powers of the Mughal emperor Aurangzeb and defeated the Mughal troops in many engagements. He was a renowned military fighter who became known as an “Afghan warrior-poet”. The stand and fight attitude of Khushal was an important stance in Afghan history, and his opinions and ideas form a new stage in the ideological and intellectual development of the Afghans. Besides poetry and prose works, Khushal also wrote various translations from Persian and Arabic into Pashto.

Khushal was born in or about 1613 in the Khattak tribe of the Pashtun people. He was the son of Malik Shahbaz Khan Khattak from Akora, in the Mughal Empire (now in Nowshera District). His grandfather, Malik Akoray, was the first Khattak to enjoy widespread fame during the reign of the Mughal King Jalal-ud-din Akbar. Akoray moved from Teri (a village in Karak District) to Sarai Akora, the town which Akoray founded and built. Akoray cooperated with the Mughals to safeguard the trunk route and was generously rewarded for his assistance. The Akor Khels, a clan named after Akoray, still hold a prominent position in the Khattak tribe. The Khattak tribe of Khushal Khan now mostly lives in areas of Karak, Kohat, Nowshera, Akora Khattak, Cherat, Peshawar, Mardan and in other parts of the Khyber Pakhtunkhwa.

Khushal’s life can be divided into two important parts — during his adult life he was mostly engaged in the service of the Mughal king, and during his old age he was preoccupied with the idea of the unification of the Pashtuns.

He was an intelligent and bold person from childhood. His first involvement in war occurred when he was just 13 years old. Apart from the fact that he was a scholar, thinker, philosopher and boisterous poet he was a prince and leaders of his tribe simultaneously. His forefathers were since the 16th century officers of the Mughal Empire. After the death of his father Shahbaz Khan Khattak, Emperor Shah Jehan appointed him as the tribal chief and Mansabdar in 1641 at the age of 28 The Mughal king shah Jahan appreciated his principality. After the death of shah Jahan His Tensions created with Aurangzeb. Aurangzeb arrested Khushal . In 1658, Aurangzeb, Shah Jehan’s successor, threw him away as a prisoner in the Gwalior fortress.[5] There he had as a prisoner or later and-Delhi-spent under detention in the mountains prison. When he returned, he dissociated himself from the Mughal Empire slowly and started with his resistance later. He took contact to other Pashtoon tribes and with support of his people he started a systematic resistance against the Mughals.

Khushal’s grandfather Malik Akoray Khan was a chief of his tribe but when he died his son Shahbaz Khan Khattak became the chief of the Khattaks. Shahbaz Khan Khattak was a prominent soldier in Mughal army. He was a brave man who fought many wars against Yousaf Zai tribe. This brave man is the father of Khushal. He also proved his bravery in fighting with Yusufzai and later on with Mugahl army that he got the name of swordman. Khushal was the elder son of Shahbaz Khan Khattak. Once a battle was fought between the Khattaks and the Yusufzai at this time Khushal was only thirteen (13) years old even then he joined this battle with his father. It means he was by birth a swordsman a necessary skill for a chieftain/ leader. We find the names of his ancestors and their qualities in one of Khushal’s poems:

My Father Shahbaz Khan was like Hatim in generosity, and was lionhearted and greater than Rustum in bravery. He was very honest, truthful and devoted to sharia. Though he was not literate yet he was rich in wisdom. And what will I say about grandfather Yahya Khan. May God bless him; he was just like Yusuf (the Prophet) in beauty. Even when on foot he was as tall as a man on horseback was. This was his physical structure; in bravery, he was also very great. My other forefather was Akoray Khan who was outstanding among the Khattaks.