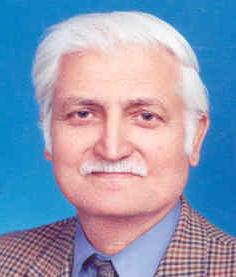 Farhatullah Babar is a Pakistani technocrat and civil engineer currently serving as the Press spokesperson of the President Asif Ali Zardari. Prior to this appointment, Babar was the senator of Pakistan Peoples Party for the Senate from 2003 till 2006; he earned public limelight after giving criticism to the government Prime minister Shaukat Aziz and President Pervez Musharraf. He is also an influential engineering figure and previously served as the President of Pakistan Engineering Council for a decade, known for improving the engineering practices in the country.

Born in Nishterabad,Peshawar, Babar belongs to an ethnic working class Pashtun family. After graduating from local high school, Babar enrolled and admitted at the Peshawar University to study arts and literature, in 1959. Babar earned B.A. (with honors) in Pushto language and in the Fine Arts in 1963. The same year, Babar pursued his career in engineering after admiring at the University of Engineering and Technology of Peshawar (UET Peshawar). In 1965, Babar earned B.E. in Civil Engineering in 1965, and followed by his ME in civil engineering, in 1967, from University of Engineering and Technology of Peshawar. In 1981, he did a one year long course in French Language and received a diploma in 1981.