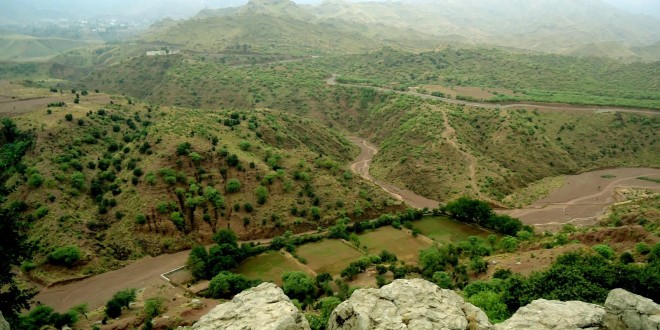 Cherat is a hill station, immediately above the villages of Chapri and Saleh Khana in the Nowshera District of Khyber-Pakhtunkhwa in Pakistan. Cherat lies 34 miles south east from the city of Peshawar at an elevation of 4,500 feet on the west of the Khattak range, which divides the district of Nowshera from Kohat.

During British rule Cherat was important as a hill cantonment and sanitarium for British troops in what was then the Nowshera Tehsil of the Peshawar District of British India.

Cherat was first used as a sanitarium for troops in 1861  and was used during the hot weather as a health station for the British troops who were quartered in the hot and malarious valley of Peshawar.  It was declared a cantonment in 1886. The cantonment commands a view of the whole of the Peshawar valley on one side, and on the other of a portion of the Khwarra valley in Peshawar District, and of Kohat District as far as the Indus.

A hospital, a church, and a few bungalows were built by the British authorities. The station, which has a good water supply, was throughout the summer the headquarters of the Peshawar Division command, and of one of the two British regiments stationed at Peshawar – a detachment of the other British regiment was also sent here.