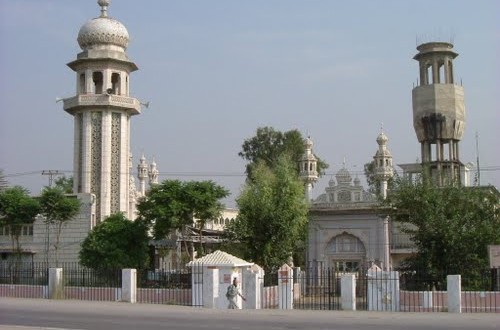 Akora Khattak  is a city along the Grand Trunk Road, in the Nowshera District, Khyber-Pakhtunkhwa province of Pakistan.
Birthplace of Khushal Khan Khattak 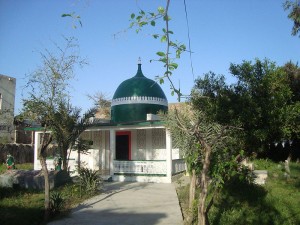 Among the Historical places of Akora Khattak,Mazar of Great seljuki Sufi Master and aalim Sheikh Akhund Adyan is situted near Landai river.The road in front of the shrine itself traces back to Sher Sha suri regime, the road is called Shahi laar or royal road. Starting from civil hospital to military camp. The decendants of Sheik Akhund Adyan Baba Seljuki are living in Ziarat kaka Sahib and called Qazyan or Qazi. Akhund adyan Baba died in 1074 AH.Sheikh was a close friend of Khushal Khan Khattak and teacher of Hazrat Kaka Sahib.

When the emperor “Sher Shah Suri’s army dug two wells in this place and made it a rest place and named the place Sarai Malik Pura. Caravans came from the Central Asia for trading purpose and stayed at this place.

In 1581 Mughal emperor ‘Jalal-ud-din Muhammad Akbar’ came to Peshawar to finish the mutiny of his brother ‘Mirza Hakeem’ and stayed there for a few years. During this stay, he met (jarga) with all the tribal chiefs for the betterment of the area. In the meeting the name of Malik Akor Khan often came up. It was reported to the emperor that Malik Akor Khan was a robber and often robbed the troops on the highway. He lived at Neelab (Nizampur) and continually created problems for the Mughal government. The emperor Jalal-ud-din Mohammad Akbar decided to resolve this problem by making Malik Akor Khan a government servant and charged him with the responsibility of collecting tolls from the caravans on the crossing of the Indus at Attock.

Malik Akor Khan came to the Sarai Malik Pura (Akora Khattak) for this purpose and made this area his living place. In time this place was renamed as ‘Sarai Akor Khattak’ which later became “Akora Khattak”. (Greek word: Agora Katika …. Khatak market place)

In 1820 Sikhs of Panjab conquered Peshawar and other Pathan areas and ruled it up to 1849. In 1826 the Mujahidin-I-Islam (Sayed Ahmad Barelvi) fought a battle against Sikhs at this place. In 1834 Sardar lehna Singh built the fort of Akora Khattak near the river Kabul and made Ahmad khan the chief of the fort.

The cantt. of Akora Khattak was established in 1850 and at 23 March 1851 Lord Dalhousie, Governor-General of India, visited the place.

In 1916 the first police station of Akora Khattak was established.